9 Types of Malware & How to Identify Them 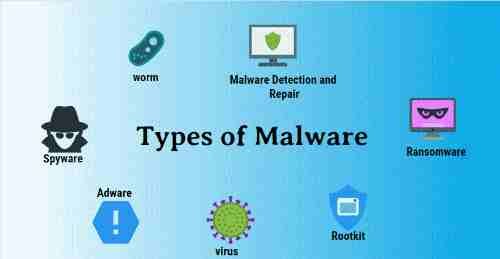 If you were to ask me what I would consider the most frightening and dangerous malware in
existence, my answer would probably be something like, “There are so many types of malware that it is hard for me to list down just one. Almost every day, new ones appear.”

The truth is that malware, or malicious software, is now more than just harmful data hidden in
computer systems. Malware has evolved exponentially since its creation by Dr Joseph L. Popp in Nowadays, viruses are coded not only with algorithms used for cryptography but also with
artificial intelligence (AI). Indeed, malware can often be very complicated and easy to notice if someone is specifically looking out for them at all times. However, they are still very dangerous, even if they are more subtle than before. Thus, there is a reason why antivirus software has become one of the most critical aspects of computer security.

What really makes malware dangerous is that it can often infect regular applications or hardware components to avoid detection by antivirus software. First, let’s jump into what malware is and talk about the 9 types of malware found today.

Malware is a type of software designed to infect a computer, smartphone, or tablet’s to damage or gain access to the data stored on it. Cybercriminals can also use malware to control the device remotely and steal sensitive information such as credit card details, passwords, or personal messages. Several types of malware often do not get appropriately identified if you use antivirus software alone. Here is a list of 9 types of malware that you should take into consideration when it comes to protecting your devices:

They are the oldest and most recognizable malware. A virus will infect a computer or device to replicate itself, often deleting information stored on the computer without the user noticing it until the damage is already done.

Computers are no longer the only target for viruses. Smartphones and tablets can now become infected with viruses, but they can pose a more significant threat because of their portability.

Worms are similar to viruses, but they are more dangerous. A worm will replicate itself like a
virus and spread to other devices on the network using security holes in the system’s software or hardware components. Thus, worms can infect a network or device even if it isn’t connected to the internet.

Worms often use security holes to spread, but they can also be programmed using certain types of programming languages.

Typically, Trojans are disguised as useful applications that users download from the internet.
However, once installed, they will run their own malicious code and cause harm not only to the device but also its user once activated. Sometimes, Trojans do not even need to be downloaded as they can arrive as attachments in emails and messages.

Remote Access Trojans (RAT) are especially dangerous because they can turn your devices into spy tools and allow the attacker to take complete control of them. The main goal for a RAT is to gain remote access and then use that access to install other types of malware onto the device.

Ransomware is commonly disguised as a message from law enforcement agencies. It will claim that the user has violated laws related to child pornography, copyright infringement, or piracy. The warning message will then lock the device and claim that you need to pay a fine using prepaid money card services or cryptocurrency for it to be unlocked.

Protect yourself against ransomware by being very selective when downloading files online. Do not open emails or messages from senders you do not know. Pay special attention when opening email attachments, even if they come from someone you know because cybercriminals can easily
send an infected document to bypass your network’s security measures.

Fileless malware is becoming more common because it can remain undetected by traditional antivirus software. It works by taking advantage of legitimate computer processes in order to download malicious code into the device.

The main difference between fileless malware and other types of malware is that fileless does not rely on files for its operation. Still, it will often use browsers to download malicious scripts
utilizing an internet connection instead.

Adware is becoming more and more common as it provides cybercriminals with a way to
monetize attacks. It can appear as an online ad banner or popup that features fake options such as
“close” and “skip.”
People often click on these adverts by mistake, and this will cause the device to become infected with malware. Cybercriminals can use this attack vector to push ransomware or other types of malware onto the device.

Malvertising is a new term that refers to the malicious use of online advertisements. It can take many shapes and forms, but, in essence, it is a way for cybercriminals to push malware onto a device by hiding it in online adverts that look perfectly legitimate.

Sometimes hackers will buy ad space from legitimate advertising networks and then include
drive-by-download scripts or other types of malware into them without the advertiser’s
knowledge. In this case, even if you do not click on an advert, your computer can still become
infected as soon as the advert appears on your screen.

Spyware is often used to steal data or information from a device. This can include credit card
details, account logins and passwords, email messages, photos, and much more, depending on the type of spyware used.

Taking screenshots is one of the common signs that your computer has spyware installed.
Although not all types take screenshots, many do. The key factor is to look for any app or
process that you did not install yourself because it could be malicious in nature.

Some types of spyware will also allow attackers to listen using your computer’s microphone
without you knowing about it by installing listening software onto the device. They use this
feature to capture your personal conversations, which include sensitive topics such as bank
details.

How to Protect Yourself from Malware Attacks

In order to protect yourself from malware attacks, you must have a good security system
installed into your device that includes at least one anti-malware software. There are many
different security systems available in today’s market, but not all of them are very effective.
It is sometimes a good idea to combine different security software to get the best results.

Many of these applications will have an auto-immune system that can detect and remove malware without human interaction, which allows you to keep your device safe at all times.
There are also many other types of security measures that you can take to protect yourself:

Use an Antivirus Software

There are several antivirus solutions available on the market. Sometimes, if one solution does not work, you can try another one using different detection methods. It is a good idea to have more than one security solution installed because it maximizes your chances of being protected from malware attacks.

You should also keep your device up to date by installing software updates when they become available. This will ensure that any new vulnerabilities that may have been discovered in your operating system or other software are patched and closed, which eventually prevents attackers from exploiting them.

Firewalls play an important role in computer security as they prevent hackers from accessing
data inside the device via public networks such as the Internet or local networks. They do this by monitoring incoming and outgoing data and blocking any suspicious activity.
Always keep your firewall up to date as well because outdated configurations can lead to
vulnerabilities that attackers can exploit. Firewalls play a crucial role in the field of computer
security which is why it is always recommended to use one if you want to make sure your device is safe from intrusions.

If you fail to use strong passwords, it’s basically like saying “open for hackers.” The more
complex your password is, the harder it will be for hackers to guess the correct combination. One of the most common ways criminals use to gain access to a device, especially a mobile one, is stealing credentials such as usernames and passwords.

Many password management tools are available for free that can generate strong passwords on the device itself without memorizing them. As a result, there is no need to save your credentials on any external servers, which usually only benefits the attacker in the end.

If you receive an email with a link or file attached, even if it seems like it’s legitimate, try
avoiding the download process as much as possible because attackers know how to trick you into downloading malware by disguising their attacks as legitimate ones.

Instead of clicking links provided in emails, type in the website’s URL manually into your
browser’s address bar and navigate that way instead. Also, avoid opening emails that seem
suspicious, uninvited, or too good to be true because, more often than not, they lead to malware infections.

Always keep your computer’s firewall activated and running at all times so that if an attacker
manages to break into your device, he will not be able to access the data inside of it. Also, never visit shady websites with suspicious software advertised on them. They are most likely scams that can infect you with malware by downloading malicious content directly onto your computer or even leak your personal information online to the highest bidder. Hence, running a public data check on yourself ever so often is a good idea.

Keep these tips in mind, and you should always remain safe from any attacks that may harm the integrity of your device.