Turn Your iPad into a Graphics Tablet 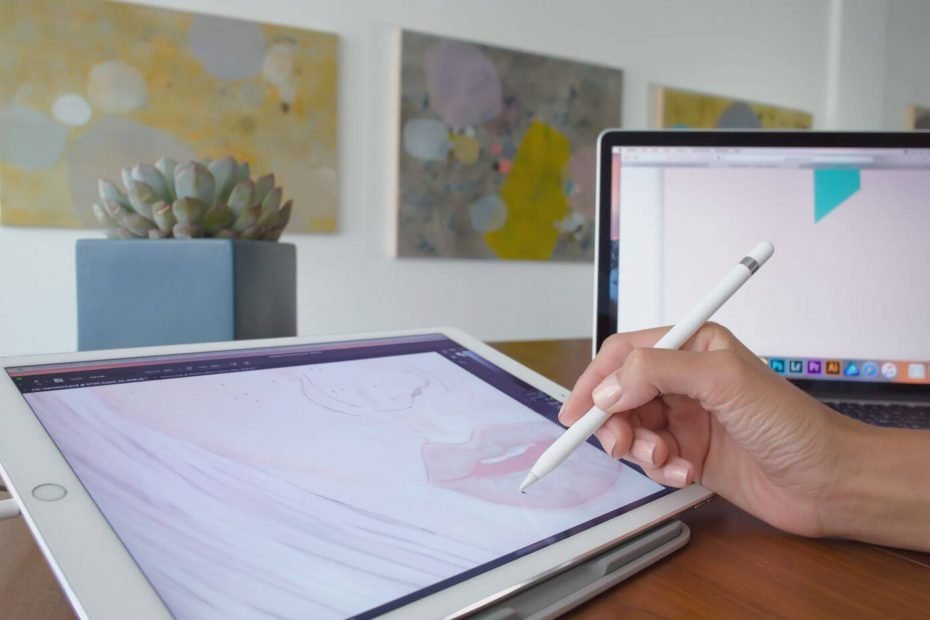 Make the most of your iPad and turn it into a tablet for drawing. If you already own an iPad or Apple Pencil, your iPad can be used as a drawing tablet. This will save you money and help you avoid spending a lot on a Wacom Cintiq.

Two main options exist for making your iPad a professional graphics tablet on your Mac or PC: Duet Display, and Astropad.

Convert your iPad into a drawing tablet

Astropad’s public beta was announced on a new landing site. Project Blue, a beta program, allows users to mirror the display of their iPad on PC and then draw, illustrate, design and create directly in Windows apps like Photoshop and Illustrator, Blender and ZBrush.

Project Blue is a similar program to Astropad studio for Mac/iPad, Project Blue can be used via WiFi or wired via USB.

The Project Blue does more than a basic drawing tablet. The sidebar is robust and the UI is easy to use.

Because no two artists work the same when it is about your creative workflow.

Duet Display is proudly called “developed by ex-Apple engineers”. It turns your iPad or iPhone in to an advanced display for Mac or PC.

The Duet app is free to download on your computer. After that, purchase the app from the App Store for iPad. Next, connect your iPad to your desktop via the charging cable. The iPad will automatically recognize your device and turn it into a touchscreen display tablet.

Duet turns your iPad and Apple Pencil in to a graphics tablet designed specifically for artists, designers, and other creative professionals. Explore a variety of touch gestures like two-finger scrolling or pan and zoom to open up a whole new world.

Astropad enables you to connect iPad and Mac using Astropad

Astropad works in the same way as Duet and allows you to use your iPad to draw directly to Photoshop and other Mac creative tools such as Illustrator and Manga Studio.

The Astropad can only be used with Mac computers. Astropad does not have Duet but it has one small feature: the freedom to connect wirelessly.

Astropad includes a number of different options, Astropad Studio transforms your iPad into an ultimate drawing tablet. The Astropad Standard, a single-purchase, comes with free updates to increase performance. Luna Display, which is the only hardware solution available to connect your iPad to a secondary monitor.

10 Apps to Turn Your iPad Into Drawing Tablet

iPad drawing apps come in many varieties. There are many of them. They range from the amazing (such Paper by FiftyThree), downright awful. What about if you are looking to do real work on your iPad? Two things are required to make my iPad a professional drawing device:

I can work directly in Photoshop/Illustrator – If you’re doing real work, you might not need a new application. Let me use iPad’s great technology and UX for drawing with professional tools, just like Wacom tablets.

Give me a vector, or give me death. A professional drawing app may choose to only use the iPad for its operations, but it needs to produce vector art I can export to Illustrator. This can include a Pen Tool, editable forms, boolean orders, and all the rest.

Here’s a step-by guide to help you create mixed-media art with your iPad.

Mirroring apps come first. There are many of these apps, but they can be expensive. You want to ensure your money is well-spent, AstroPad is the latest app in this area.

AstroPad is the newest product in this category. It’s also the most popular. With cool shortcuts and almost zero lag, you can draw in Photoshop or illustrator on your Mac. It’s $24.99 to buy and provides the best quality graphics. AstroPad has a revolutionary LIQUID technology which guarantees that the quality and resolution of your images will never be lost. Astropad offers students a discount and a free trial.

AirDisplay is an iPad App from Avatron. It’s a great option for artists who are looking for an effective mirroring application. AirDisplay allows you to mirror your iPad’s contents on up to four monitors simultaneously. The app connects via wireless Internet and eliminates all USB cables. It makes drawing more enjoyable and easier. AirDisplay currently supports Android, Apple and Windows. It costs $14.99.

Avatron also manufactures Airstylus which is an extension to AirDisplay. The program allows you mirror on iPads, iPhones, and the Galaxy Note using the same mirroring techniques. It allows artists to draw with a stylus on their tablet. This stylus is highly sensitive to pressure so it is ideal for any work that requires precise lines and small details. The stylus can be linked wirelessly to the display so you don’t have to deal with clunky cords. Avatron has made it clear that they are discontinuing AirStylus. However, older versions can still be purchased in the Apple App Store for iPad for $14.99.

SplashTop remote allows users to control their computer remotely from anywhere. The app lets you control your computer via your iPad and access other things such as videos, music, and more. SplashTop makes it easy for artists to access their favorite art or drawing software on their iPad. This app is free to use on your local network. Users will need to pay $16.99 annually for “Anywhere Access”.

iDisplay can be downloaded for free on Mac OS X, Windows and Linux. This popular app allows people to use an iPad as a secondary display. This app can be used to draw from a table. Additionally, it can be connected to multiple wireless devices at the same time which allows for more screen space. It is also customizable to be used with different devices.

Next, let’s talk about the drawing tools. These are pretty amazing.

Procreate has become a favorite tool for illustrators and letterers from all over the world. The app lets you sketch and draw highly-realistic artwork wherever you are with its suite of tools. These include digital brushes, advanced layer systems, multi-touch gestures and multi-touch. The app can be used to export PSD files, time-lapse videos and layered PSD files.

Procreate allows for the use of custom brushes. Creative Market has many independent designers who have created textured brushes sets that will help you simplify your illustration workflow.

iDraw vector drawing app is among the best on the market. It combines the power of a computer with the simplicity of an iPad. It includes a pen tool and layers as well as boolean commands, grids. snapping, effects and more. It’s easy to use and consistently high rated by users. It’s easy for users to edit and share designs between different devices (like Macs and iPads). Some of the most exciting functions include core text editing, Photoshop import/export and an In Place Color Picker.

InkPad, a free vector drawing program for iPad, is one of the best. Users love its ease-of-use, gradient fills, and simplicity. Its tool list is comparable to Illustrator and is easy to learn, even for beginners. You won’t find a better drawing tool or a lower price than this one if you are looking for a powerful tool.

Intaglio Sketchpad from Purgatory Design is a tablet-based drawing app that will appeal to vector artists looking for something easy and reliable. Multi-touch technology is used to create the app.

TouchDraw was created by Elevenworks. This app has all the usual options for 2D Vector drawings and more. This app is compatible with TouchDraw Mac and has all the features you would expect from a desktop vector drawing application. TouchDraw has been rated the best vector app available at an affordable price of $8.99.

iDesign is a popular vector app that allows you to create 2-D vector drawings on your iPad or iPhone. iDesign has a simple interface and a wide range of advanced, in-depth functions. Some of these features include a fullscreen board view, which ensures your image isn’t obscured. Also, there are offset handles that allow you to move the screen. This means your finger won’t get in between what you’re trying to see. iDesign can downloaded from the Apple App Store for $7.99

Adobe has launched a new app for creating brushes with your iPad in late 2014. Our step-by-step guide is available here.

Tell us about your workflow

Do you use your iPad to do professional drawing? We would love to hear about your workflow. Use a mirroring application like Astropad, a vector-drawing app like iDraw, etc. We’d love to hear from you.

Cool add-ons to your iPad

It’s a great resource for designers and illustrators alike to create color palettes wherever you are. You can create bright schemes from wherever you are with this add-on.

Why buy a Cintiq? AstroPad allows you to use your iPad as a graphics tablet for your Mac.

Wacom Cintiq may not be the best option for you if you have always wanted to get hands-on with your design but are just too expensive. There is a new solution that can turn your iPad into an excellent graphics tablet for your Mac.

Astropad is an app created by Matt Ronge and Giovanni Donelli who were ex-Apple engineers.

The Astropad allows your iPad to be used as a full-fledged graphics tablet.

Astropad allows your iPad to be used as a full-featured graphic tablet.

Astropad allows you to connect an iPad to your Mac using either your wi fi network or USB. You can then use the iPad as a touch-sensitive secondary display. While you may already be aware of this feature, Astropad offers superior performance and outstanding image quality.

Astropad, which uses its own LIQUID technology that Ronge and Donelli developed, uses colour correct to ensure the exact same thing on your iPad as on your Mac. It also makes it fluid and responsive by using GPU acceleration (twice as fast than AirPlay) and special network optimizing to work at up 60fps without losing image quality. Astropad’s iPad app uses ARM Assembly code to increase battery life.

Astropad’s colour matching technology and performance will ensure that your iPad sees the exact same things as your Mac.

It is compatible for most pressure-sensitive iPad styluses. Astro HQ recommends either a Wacom Intuos Creative Stylus 4 (or the Adonit Jot Touch 4), but warns that recent models have precision issues and can produce wavy lines, particularly on iPad Air 2.

This tablet is priced at $49.99. But you can still download Astropad for free and use it to check it out before you buy. Although the Cintiq still boasts a larger display, the rumoured iPad Pro with 12 or 13 inches of screen will be available in the coming months.