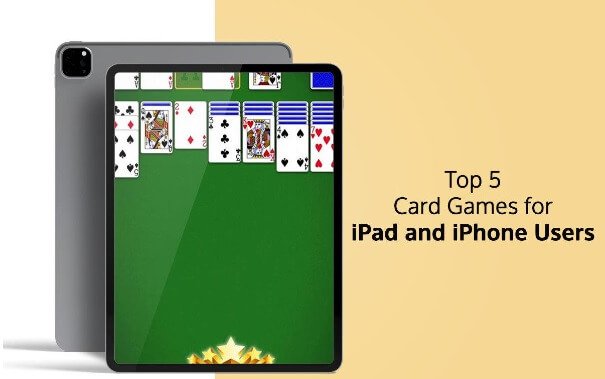 Card games are not new. They’ve been around for a long time. Unless you live under a rock, you must have engaged in card games with your friends and family. These are the go-to entertainment during social gatherings and get-togethers. They add the missing pizzazz to the event and ensure everyone has a great time.

You will find several fantastic card games on the App Store to keep you entertained. Whether you have an iPad or iPhone, these are some games you must install on your device.

If you haven’t played, Phase 10: World Tour yet, you are missing out on a world of entertainment and fun. The game is described as Rummy with a Twist, and each hand has sets of cards that players must collect before their opponents get the chance. The objective is to empty your hand.

The game concept is straightforward, and there’s a lot of room for variations. You can play the game with your friends and family.

The game is built on the basic rules of conventional card games, but there are new international leaderboards, playstyles, and more. Players can challenge other players globally and compete with them. You will love this application if you enjoy traditional games like Rummy or UNO.

Spider Solitaire is a classic card game that has entertained people for several years. The game was a part of the Microsoft Solitaire Collection and came pre-installed with every version of Windows. The game got a makeover as it made its way to the online platforms. Today, you can play Spider Solitaire on your mobile devices. It is possible to install the game on your iPhone and iPad. Then, you can finish playing a match no matter where you are. You can compete against random online opponents and engage in intense battles. You can also participate in cash tournaments and win lucrative prizes and rewards. There are also practice games that you can play to sharpen your skills.

The objective of the game remains the same. You have to arrange the cards ascendingly and transfer the finished build to the foundation deck. There is also the undo and submit button that you can use when you find yourself stuck. So, download the game and spend hours arranging the cards by their suit. You can even increase the difficulty level by choosing to play two-suit or three-suit Spider Solitaire games.

Crazy Dave is back to defend the world from the zombie invasion with his anthropomorphic plants. They will protect the world in this superhero-inspired, whacky card game.

PvZ games are always entertaining, and players don’t take things too seriously. The game is much more fun than the other versions, especially if you are a card game lover. The game provides terrific sound effects and Batman-like music to keep the players interested. The game is enjoyable, and it is pretty well-balanced. Players get to pick a side when they are playing, and they can choose from a wide range of different zombie and plant cards. Each of the cards has its unique abilities.

The game is geared toward a younger audience, with several in-app purchases. You will also come across limited packs and events encouraging gamers to put their money into the game. Players can expect purchases that might even range upwards of $100. You can even find rare cards to help you go ahead in the game.

Chaos Academy is an exciting card game set in a world where demons, gods, and other supernatural forces depend on the belief of humans. They thrive as humans worship them, and the game features several thousands of cards with diverse skills and abilities. There are various mythologies and ancient religions associated with the cards. The game’s artwork is varied and stunning. There are countless influences of several periods from human cultures and history.

At first, Chaos Academy doesn’t seem like a game that is out of the ordinary, but when you start playing it, you will fall in love with the anime-style collectible game. There are lots of ways that the game differentiates itself from the rest. The game is straightforward, and it seems like a cross between a typical CCG and chess. Each player is given an Emperor card that comes with a lot of HP pool, but the card cannot deal with damages. There are also hero cards that you can use to protect yourself.

UNO is one of the most popular card games on the planet, and you must have heard about it or played the game at some point in your life. You can play the game on your mobile devices and compete with your friends or random online opponents. You can choose from different play modes, which are set in real-time. You can enjoy playing the game solo or partnering up with your friends. You can also play against the computer. Alternatively, you can let the app randomly select an online opponent for you.

The app stands out because it offers a wide range of customization options. For example, you can also change the house rules and decide what goes and stays.

You never have to get bored again because you can download the aforementioned card games on your iPad or iPhone and have a great time.