How do the slot machines function? 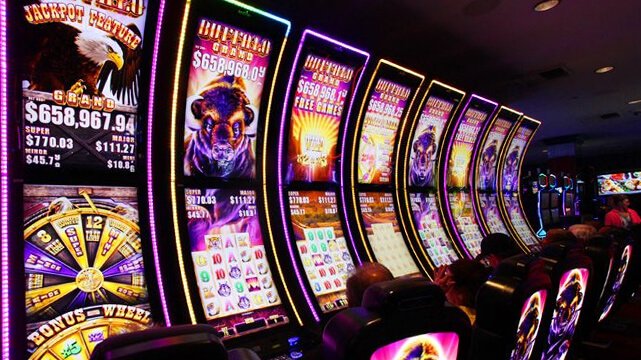 The history of the slot machine is a testament to the triumph of engineering and innovation when it comes to bringing a new form of entertainment to the world. Charles Fey was born in Bavaria in 1862 and he moved to France and England before moving to the United States.

He travelled the country before settling in San Francisco where he worked for the Western Electric Works from 1885. In 1895, Fey had an idea that would change the face of popular entertainment and his enthusiasm for it saw his invention being adopted all over the world.

Slot machines did already exist in the 1880s, namely in the form of the Poker Machine designed by Sittman and Pitt in 1887. However, these were quite labour-intensive for the venues in which they were situated as they relied on a member of staff being constantly available to check the results and make a payout, usually in the form of tickets or tokens.

How do slot machines work?

The original slot machines were designed to have five spinning drums with fifty playing cards attached to them and players pulled a lever to spin the reels. The two missing cards were the ten of spades and the jack of hearts, meaning that the chances of a royal flush were halved to give the machine a house edge.

If the reels landed on a winning poker hand, then the player would win a payout, usually a free drink or cigar from the bar, but this had to be checked and verified by a member of staff. Charles Fey simplified the design to make his Liberty Bell machine, altering the layout in the format that we recognise as a slot machine today.

Firstly, he removed two of the reels to leave three, replacing the nearly-full deck of cards with a simplified selection featuring diamonds, hearts, spades, horseshoes, and the eponymous Liberty Bell. It was much simpler for the machine to identify matching symbols, with the highest payout being made for the three Liberty Bells that gave the machine its name.

This new machine with an automated payout mechanism proved hugely popular among players that appreciated the fast-moving game that they could play in their favourite entertainment spots. Charles Fey did not patent his machine and, once it became apparent that these machines were taking the country by storm, other manufacturers soon began to produce machines of their own.

The evolution of slots

Because they were so popular, slots were constantly being redesigned and improved in order to give players a more entertaining experience. By 1902, slot machines were banned in the United States, but this barely slowed down production and the next generation of machines featured fruits on their reels, giving them the name of fruit machines in many places around the world.

The ban meant that the prizes paid out could no longer be in cash and so took the form of sweets and gum, usually to match the fruit symbols on the reels themselves. In 1907, a slot machine manufacturer in Chicago began to produce a machine called the ‘Operator Bell’ which could soon be found in bowling alleys, shops, salons, and tobacconists and these were the first to feature the BAR symbol that modern players are all familiar with.

The next development saw slot machines leaving behind their purely mechanical origins as the first versions to feature electrically-operated reels. To preserve the most recognisable elements of their predecessors, these machines were still triggered by the pulling of a lever, although it became largely ornamental as the reels were entirely electrical.

Fully electromechanical slots were the next step in the slots machines’ evolution, and video slots went into production in 1976 when the Californian company Fortune Coin used a modified television screen for its display. Originally installed in the Las Vegas Hilton hotel, this machine earned the seal of approval from the Nevada State Gaming Commission and it wasn’t long before they were being installed in a variety of venues along the Las Vegas strip.

The late 1990s was a time of swift and significant change for the latest iteration of the slot machine as computing technology took this popular game to the next step. The first digital game that included bonus rounds with completely different graphics was launched, allowing players to try and win additional payouts.

From there, it was only a matter of time before slots became an online phenomenon, operating in the same way that their traditional counterparts did, but with the added variety that could now be incorporated into each game. This allowed designers to build on the already popular format of the game to include themes, new layouts, different structures and a variety of mini-games.

Slots have always been hugely popular among casino players and this did not change when they began to transform the online gaming industry. Virgin Games play slots provide many more possibilities for players to enjoy extra rounds, free spins and bonuses, all programmed into the machine itself, online gaming has never offered so much variety.