5 clues your phone has been hacked, and what to do next 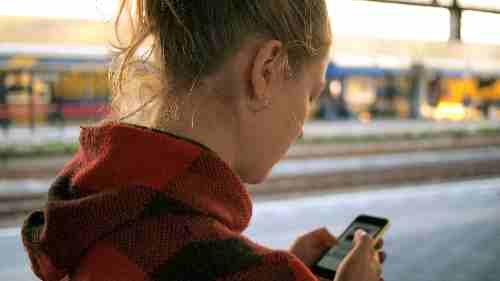 Let’s be honest: we all check our phones multiple times a day. We have a fairly good idea of how we use our phones, along with how our phones tend to behave. So, if your phone is acting up, you might be wondering: is it possible for someone to hack your phone?

Unfortunately, the answer to the question “do phones get hacked” is yes. Mobile phone hacks are common, and they usually occur when a user accidentally downloads a malicious app, clicks on a malicious link or jumps on an unsecure WiFi network. In other words, there are many avenues hackers can take to gain access to your phone.

Here are 5 signs your phone has been hacked and how to secure your phone from hackers, according to the cybersecurity experts at ESET.

Are you seeing mystery apps you have no memory of downloading? If you’ve had your phone for a while and new apps have been installed, your device might be infected with malware. Avoid opening or interacting with those apps, and delete them from your phone right away.

On the other hand, it’s normal for new phones to arrive with pre-downloaded apps. For example, Apple’s iPhones have a slew of built-in apps, such as Calendar, Camera, Contacts, FaceTime, Health, Podcasts and Voice Memos. On Android phones, the featured apps include Google Play Store, Google Search, Gmail and Maps. Before panicking about a potential breach, make sure the apps you don’t recognise aren’t any that your phone’s manufacturer installed for your benefit.

If you scroll through your texts, phone log or email outbox and spot messages you didn’t send or calls you didn’t make, that’s a sign of a hack. When cybercriminals successfully hack into a phone, they often try to spread malware or viruses to your content — and jack up your phone bill via premium rate calls and out-of-network messages.

As for how to check if your phone has a virus, if your data usage has spiked or even skyrocketed but you haven’t been using your phone any differently, that’s another red flag. One caveat: there are a few reasons why your data usage can go up, including using a new app or relying on 4G or 5G instead of wifi when you’re travelling.

Is your phone really slow all of a sudden? Is it taking a long time for websites or apps to load? Is your battery draining faster than usual? Smartphones are sophisticated devices, and for the number of things they do, they typically work quickly. If your phone is lagging in one way or another and your software is up-to-date, a hacker may have installed malware, which is now running in the background and slowing down your phone. There are many types of malware (short for “malicious software”), but basically, it’s code that destroys, damages or steals your data.

If you’ve ever used your phone outside in scorching weather, you would have seen that it sends a warning that your device needs to cool down before you can continue using it. That’s a rare occurrence, and only really happens when you’ve been using your phone for extended periods outdoors.

If your phone is running hot or overheating at random times, you might be dealing with malware or mining apps. These viruses and apps burn enormous amounts of power, which can not only affect your phone’s performance but physically cause it to heat up. You might also notice a weird whirring sound, which is another sign of a hack.

If you were an internet user during the dial-up days, you’d be familiar with bright, flashing and spammy pop-ups. They were prevalent then, and even now, strange, unsolicited pop-ups with ads or warnings are suspicious — no matter what kind of device you’re on. The same goes for software security warnings, especially if you don’t have that brand of software installed. Often, cybercriminals try to trick you into clicking on a link or attachment in a distracting pop-up, and when you do, it infects your phone with a virus.

Between our personal and work lives, we rely on our phones more than ever. If you’re worried you’ve been hacked, invest in the best phone antivirus software — and if you already have one, make sure it’s updated.

A mobile antivirus like ESET Mobile Security can protect your trusty phone from a range of cyber threats, including malware and spyware. It prevents unauthorised users from gaining access to your networks and systems and blocks offensive and harmful content so you can browse the web safely.

Now that you’ve learned how to know if your phone is hacked, go into cleanup mode and delete unfamiliar apps, back up valuable content (like photos and contacts) to the cloud, and change the passwords to all your accounts.